Shopping Cart
Your Cart is Empty
Quantity:
Subtotal
Taxes
Shipping
Total
There was an error with PayPalClick here to try again

Thank you for your business!You should be receiving an order confirmation from Paypal shortly.Exit Shopping Cart

We are excited to announce that tickets are now on sale for our 40th Anniversary Concert at the PumpHouse Theatre in Takapuna.

Tickets can be purchased from band members or online https://pumphouse.co.nz/whats-on/show/40th-anniversary-celebration/" target="_blank">here 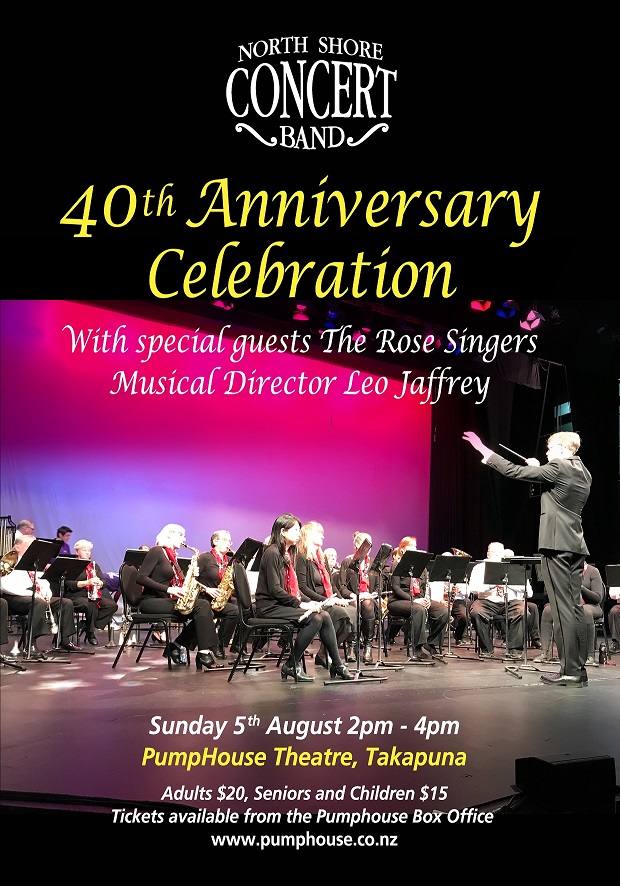 Bon Voyage plus other news updates

A goodbye (for now)

We would like to wish our amazing Muscial Director Alex Eichelbaum all the best as he heads off to Europe. We hope to see him back intermittently next year.

And a big welcome

To Leo Jaffrey who is taking over the role of Musical Director. He will be conducting our next concert in Browns Bay.

Our annual concert at the wonderful PumpHouse Theatre is just around the corner.

We are now fully concentrating on this, having just come back from our first performance at the national NZ Concert Band Association Festival in Whangarei, which was a fantastic experience all round.

This year we are playing music from all around the globe from ‘Out of Africa’ to ‘An American in Paris’, stopping over for some Arabian Nights with Rimsky-Korsakov’s ‘Scheherazade’ and travelling through a variety of musical styles before returning home to NZ with the lovely ‘Hine e Hine’.

A new concert and a cancellation

We are very pleased to be returning to the Northbridge Retirement Village in April as we haven't played there for a while.

However, the Kensington Park concert on March 19th has been cancelled. We hope to play there later in the year.

The North Shore Concert Band will be back from summer holidays on Tuesday 31st January and we'll be practising for a set of summer concerts in March:

Looking forward to getting back into it!

Our final event of the year is Christmas carols at Albany Lakes.

We are very much looking forward to playing our first concert at the beautiful Auckland Botanic Gardens on Sunday 20th November.

Here is the planned programme:

It's been way too long since our last post.

Since then we have welcomed Alex Eichelbaum as our new Musical Director and we are now working towards our big annual concert at the PumpHouse Theatre in Takapuna, which will be a celebration of great music from Movies and Musicals spanning a number of decades.

Our PumpHouse concert has sold out for the previous two years and we are really looking forward to this one on Sunday August 7th at 2pm.

Tickets are now on sale at www.pumphouse.co.nz

See the poster on our home page for details.

The North Shore Concert Band is looking for a new Musical Director! We will be auditioning late March / early April so if you're interested or know anyone who might be - please get in touch.

In the meantime you can catch our current MD, the marvellous Mike Ashton, waving a stick at us for the last time this Saturday (Feb 27th) between midday and 2pm at the Browns Bay Village Green.

The band will back at Birkenhead College for rehearsals on Tuesday 2nd February 7:30 - 9:30pm

That went well!
by [email protected] |

Programme for our November 15th concert
by [email protected] |